We had unfinished business with Mt Aleck, an attempt to summit it in 2009 had failed. 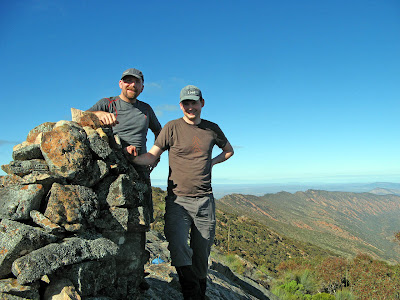 Back in 2009, it was a hot October day, over 30 degrees. Today it was cool, sunny winter’s day. Ideal hiking weather.

Back in 2009, we undertook the hike as a day hike. Leaving the car at 7.30am, we gave up on summiting around 1pm, realising we would run out of time. Today we set out from an elevation of 645 metres, yesterday afternoon we hiked up from 385 metres where the car was to our campsite at 645 metres – with plenty of time allocated to do so. Today we set out at 7.30am from our campsite, we summitted by 10.20am in the cool of the day. As the weather warmed we returned to the car, back by 3.15pm.

Back in 2009, we ran very short on water. This time we took extra water and left it under a tree on the flats, there as a contingency for camping a second night.

Back in 2009 we used a Wild article as a route plan. This time we used that as a broad guideline, and interpreting the contours on the topographic map made our own route plan, shorter and easier.

It’s arguable that 2009 was a reconnaissance trip for today’s hike, what we learned from that we put into a carefully calculated plan with a number of contingencies. We didn’t need to use any of the contingencies, the excellent weather lent itself to pulling the plan off within the allocated timeframes.

By continuing due west from the Umberutna ruins rather than skirting around to the north, we saved some distance in exchange for a short, steep - but quite manageable - climb. This led to a valley in which we selected the best creek to climb from, south of the first saddle. Back in 2009 we had gone up a very steep creek to the north of the first saddle. It had been tough climbing, there couldn’t have been a greater contrast with the creek we went up this time. 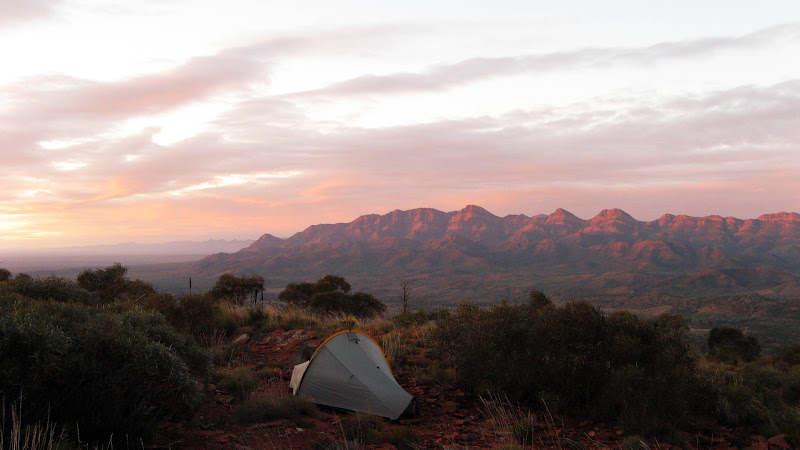 We had left Adelaide early Friday morning. Our afternoon plan was to climb that 260 metres above the plains to our chosen campsite. It was cool and windy. In Hawker it had been cold, I feared we would have a miserable night at such an elevation, but we had a fire on the sheltered side of the hill. We could have camped higher, on the first saddle, but it would have been very tough climbing up there each carrying out pack with a tent, sleeping bag and food. Light as they were – around 15kg - it would have been tough. Our campsite had a stunning setting. Behind us lay the sawtooth escarpment cliffs of the Elder Range, before us the valleys between the Elder Range and Wilpena Pound. We were treated to a spectacular sunset, and an equally spectacular sunrise the following morning, albeit after a very cold night.

Early the following morning, with the whole day before us, we started the steep climb, following an escarpment cliff, to the first saddle. In only 20 minutes we were on the saddle, this route was so much quicker than our route of 2009. From here, we climbed and descended each ridge along the sawtooth escarpment, sticking closely to the escarpment edge. We had learned only too well back in 2009 that it was much easier to stick to the open rocky escarpment edge, rising up and down the sawtooth profile, than to try the flatter route contouring around each peak. The vegetation makes it slow going, the spinifex made it quite unpleasant. The vegetation was considerably denser this time compared to 2009, since then there had been two wet summers. Last time there was very little shade on the ridges, this time there was plenty provided by the two to three metre shrubs. 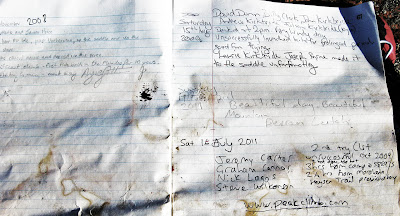 By the time we reached the third saddle, we had spotted a cairn looking structure atop what might be the summit of Mt Aleck. It seemed impossible that the summit was that close. It was a little askew, so we weren't certain it was a summit cairn. However after another tough climb, we could see the unmistakable cairn ahead, and it was an easy to matter to close off that last distance. The cairn was indeed an interesting one, carefully perched atop the highest point of the mountain.

Leafing through the summit logbook, we were only the second group on the summit this year (2011). The previous year, 2010, saw no visitors, and 2009 just one. Yes, there was a pencil in the logbook container.

Our hike times had been perfect to the plan. There were a couple of sections along the sawtooth ridge that were particularly tough, dense vegetation with no escarpment route. We tried one shortcut, but it was woefully time consuming. 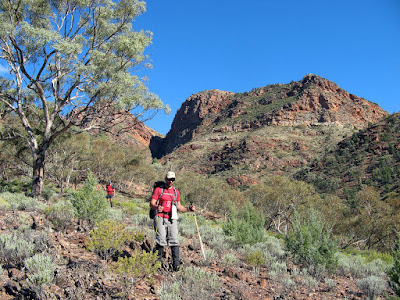 We retraced our steps back to the campsite. Even though we summitted by 11am, it was quickly getting warm. Yesterday had been a cloudy day, with strong wind and a few drops of rain. Today had been glorious, clear skies and warm sun, a thankful relief from the winds of the previous day and the cold night. From our campsite we descended back down the steep line to a saddle, down a steep creek onto the flats to collect our water drop. We walked back to Umberutna ruins, and along the Heysen Trail to the car, and on to the pub at Hawker for a celebratory beer and meal.

1st August: Some hikers have since told me of an easier route. Proceed up either of the scree chutes close to the summit. We debated doing this, but we never got close enough to the bottom of the chute to see how it started. It's steep, but quick.

* The stats for the second day are divided into the ascent and descent.